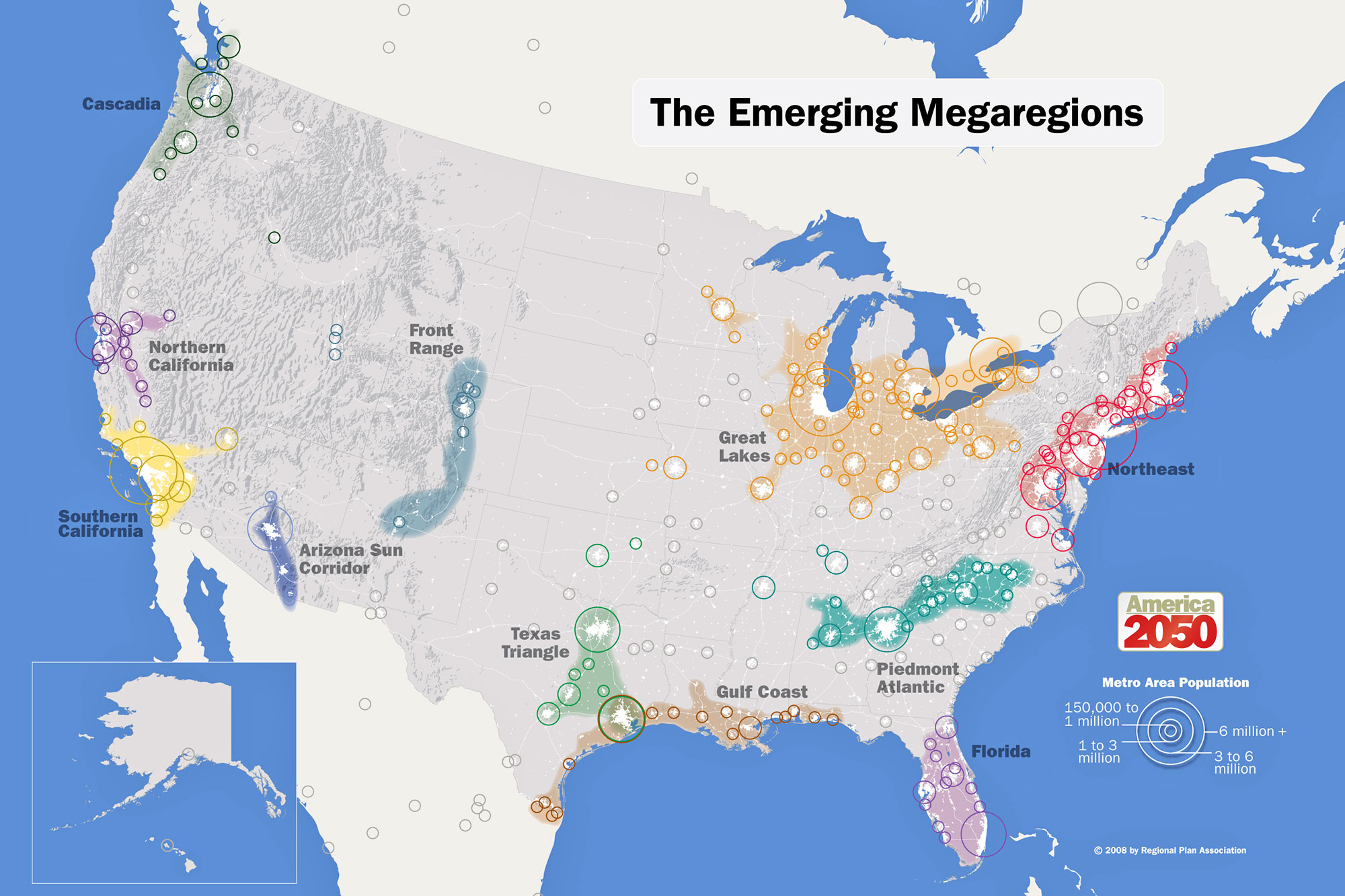 So I was reading John Rappoport's latest offering,  and while I was reading about the governors 'opening up' their states and people rushing in to live in a space with more 'freedom' and luring businesses and economies thriving; I thought about the map posted above. Notice how it is almost all of Florida? Then I thought of the Pied Piper.

Let's say, for shits and giggles, that my plan is to create 'Megaregions' which are based on 'Smart' technology involving round the clock surveillance and control at every level. Now how do I bring in the population to fill these spaces and create these 'Megaregions'? What could I possibly use to lure them while giving them the impression that it is their idea and a 'good' one to boot?

Then I remembered this plandemic thingy that we are being bludgeoned with on a daily basis and I thought: "What a great carrot.". Here are two regions which are nice and sunny most of the year and offer 'chances' at more 'liberty'; no masks, no tracing apps, no vaccine passports. Sure sounds like heaven right now. "Come one, come all" and people are flocking; 'normies' and 'alt-thinkers' alike. But what will be their final destination?

Life seems to be a great big game of chance for the many while the few seem to enjoy 'eventualities' which are seemingly timed like clockwork. I have to wonder how many 'bases' are actually 'covered' against us. Tick Toc, we're running out of time.

Now, I'm not saying "don't move to these states", I am simply suggesting that you avoid the cities. That you get together and move with 'purpose'. Only through the creation of a better life can the 'minds' of the many be convinced that theirs requires 'attention'.

“You never change things by fighting the existing reality.

To change something, build a new model that makes the existing model obsolete.”

The 'things' mentioned incorporates the mind of the many, as what the many believe their 'reality' is may very well destroy us all. All of these years not coming together and building a real alternative has really left us on a reactionary trajectory which will facilitate the 'plans' of the soulless if we let it. All we had to do was leave our basements and take a chance on people and life, well now is the time to do just that.

It is time for people to start stepping out of their ordinary and coming together as sane and informed individuals, rather than succumbing to their own, selfish needs. It is time (better late than never) to build a way of life which the many will 'desire' rather than their self-accepted prisons; a proverbial 'Galt's Gulch'. A haven which humanity can gravitate to in due course.

Think about that for a second, the programming is so good that people would rather accept their plight than inform themselves and discern 'alternative' information. How sad to have to witness the degradation of my species to the level we are now and 'knowing' that far worse is on the horizon. How frustrating to realize that I am transmitting this on such a temporary medium. But I digress.

I have said it before and will repeat it again: The only way out is for people to become better people. For these people to get together to create a way of life which is based on sane and informed individuals living as natural human beings.

Just remember that the 'better' ME is simply an illusion so that the path seems to have a 'destination'. Enjoy the ride and be the best version of you that you can be. Just make sure that it is your ride and don't blindly follow the pied pipers.

Posted by Sylvain Lamoureux at 23:15

That image(map) is a good one... It shows the AVOID AT ALL COST AREAS.